Twelve months after the president of Sri Lanka declared its first state of emergency over food shortages (30 August 2021), the country has spiralled into economic chaos that’s affected every corner of the population. Fuel shortages have meant vehicles transporting fruit, fish and vegetables can’t deliver their goods; medical supplies are difficult to access, and families—especially children—are nearing the edge of acute malnutrition.

What’s The Situation In Sri Lanka?

Many families are surviving on only one meal a day, experts say. Around 6.3 million people in Sri Lanka are now food insecure, meaning they can’t access nutritious food on a regular basis. As a result, around 5.3 million people are either reducing meals or skipping them. And the war in Ukraine has meant fertiliser has not been shipped to Sri Lanka, adding more uncertainty to an already stunted rice production, Sri Lanka’s staple crop, and raising alarm for further economic and food disaster.

‘The situation is so bad that experts estimate acute malnutrition to rise from 13 per cent to 20 per cent, while the number of severely malnourished children is expected to double,’ according to the Journal of Indo-Pacific Affairs.

How Can We Help?

A coalition of Baptist organisations, however, with support from Baptist World Aid, is working together to address the needs of food security, provision for basic medical supplies and advocacy around the specific issues that Sri Lankans citizens, especially the marginalised, now face daily.

‘So many are caught in the midst of much need,’ said Roshan Mendis, director of APBAid, a Christian Partner of Baptist World Aid, who recently asked Australian Baptists to advocate to the Australian government on behalf of Sri Lankans facing such human rights violations. ‘Because there has been an intense and targeted crackdown and arrest of individuals identified as leaders of the protest, our coalition and letter (to the head of mission of Australia for the UN) urgently demands the Sri Lankan government uphold democracy and safeguard fundamental human rights.’

. . . experts estimate acute malnutrition to rise from 13 per cent to 20 per cent, while the number of severely malnourished children is expected to double.

Through our Disaster Action Fund, Baptist World Aid has been supporting local Christian Partners like APBAid since April to provide basic dry food rations, given the food crisis, basic shortages and the volatility of prices in the region. Baptist World Aid also helped supply generators to support the loss of power.

‘We are actively working with and exploring ways that we can further financially and prayerfully support our Partners there during this time,’ said Melissa Lipsett, CEO. ‘APBAid is a valued partner—not just in Sri Lanka but in other places of deep need including Myanmar. We continue to pray for the good work our Christian brothers and sisters in Sri Lanka are doing during this especially difficult period.’ 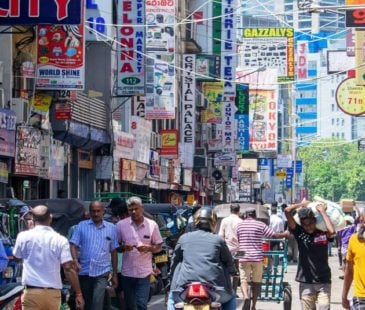 Give to our Disaster Action Fund and you can help provide basic dry food rations and emergency power to families in Sri Lanka. Give today.

Jo Kadlecek
Jo Kadlecek moved to Australia from Boston six years ago and lives in Sydney with her husband and their dog, Clark Kent. She was the senior editor at Baptist World Aid Australia from 2021-2022. With the increase of conflict in our world, more people-usually from developing nations-are going to bed...