How Power Moves According To The Fashion Industry

Here’s a lesson on how power moves in our world, brought to you by the global fashion industry.

On one side of the world are fashion brands: sparkling head offices, executive suites, shareholders demanding profit. On the other side, we have garment workers: many working six days per week yet struggling to feed their families.

Between these groups, there’s a range of actors with varying degrees of leverage and power. But the most concentrated amount of power sits with those with financial leverage, or those with deep pockets.

Unfortunately, history has demonstrated that the innate search for profit in a capitalist society has often occurred at the expense of people and environments, often in the Global South. This exploitation of labour and natural resources reinforces a power imbalance, with money as the primary driver.

Here’s where you come in. The chain doesn’t begin with fashion companies. It begins with consumers and product demand. It begins with you. When consumer demand for fashion changes, the effects ripple throughout the supply chain, all the way through to people making our clothes. Think of it as a reverse power exchange.

As we mark the ninth anniversary next week of the tragic Rana Plaza collapse—an event that killed over 1100 garment workers after a Bangladeshi garment factory crumbled, catalysing the current ethical fashion movement—let’s reflect on the power of collective movements in creating change.

The Power Of A Sweet-Tooth

In 1820s Britain, women had little power in the traditional sense. They couldn’t vote, undertake higher education or own property if married. But they did have household buying power. During this period, sugar was largely grown by slaves in the West Indies. A woman named Elizabeth Heyrick fervently believed in the abolition of slavery and led a campaign which saw mass boycotts of slave-produced sugar, with sales dropping dramatically.

Ladies’ anti-slavery associations were set up across the country fuelling domestic fundraising and petitioning. While women couldn’t vote on policies, they could control where their kitchen budget was spent. Ultimately, these efforts became so widespread that they led to the parliamentary campaign to end Britain’s involvement.

When Fashion Shifted A Nation

Until 2012, the Uzbekistan government mobilised school children to pick cotton, leaving schools across the country closed during harvest. Three years later, after losing the child workforce, the government forced over a million adults into harvests under threat of losing their jobs. In recent years, we’ve seen a groundswell of action around forced labour in Uzbekistan–one of the world’s largest cotton producers.

Through the Cotton Campaign—a coalition of international human and labour rightsorganisations—a global boycott on Uzbek cotton was imposed in 2011, and over 300 global brands signed on. Alongside international advocacy, this played a part in Uzbekistan’s 2020 prohibition of forced labour in the annual cotton harvest.

In both of these movements, the common threads are purchasing power and collaborative action. If Elizabeth Heyrick alone had stopped purchasing slave-made sugar, or just a single fashion brand had signed the Uzbek cotton pledge, the power for impact wouldn’t have existed.

How Can You Use Your Power To Contribute To Positive Change?

We love highlighting stories of progress like those from Uzbekistan and Heyrick, but modern slavery and worker exploitation are still widespread issues affecting millions of people. At Baptist World Aid, we aim to lift up those who have traditionally been considered powerless, because we see a world where all people enjoy the fullness of life as God intends.

That’s why we continue working with fashion companies through our Ethical Fashion Report. Part of the reason we have this ability to advocate to companies—and have them engage—is because of you! Like Elizabeth Heyrick, you can decide what change your budget will catalyse, or cause it will support. When companies know consumers care about their score, and are willing to take their money elsewhere, we see genuine investment in improvement.

So, how can you use your power to contribute to positive change? Educate yourself on the issues at play and add your voice to an established initiative or campaign. Have a conversation with your family and friends. Consider where you spend your money—a tool like the Ethical Fashion Guide can inform your purchases. Even better, use the Speak out to Brands tool to advocate to companies.

It’s time for a revolution in the fashion industry – and we need power from all players to make that happen. Imagine how many Rana Plaza’s or Uzbekistan labour tragedies could be avoided if we each used our power where it counted most.

Which brands are putting people and planet before profit? Use the Ethical Fashion Guide to Inform Your Purchases. 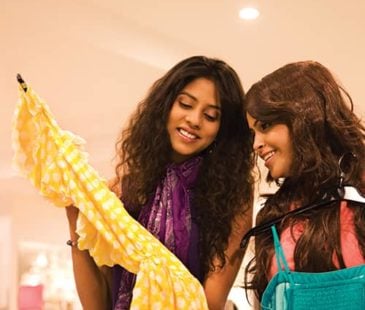 Which brands are putting people and planet before profit? Find your favourite brands, shop with your conscience, be vocal. How Much Does Your Shirt Really Cost? Beneath fast fashion is a life of exploitation for millions of garment workers. Sophia Russell lifts the lid...

Five Things I Won’t Do As An Ethical Fashion Researcher Bonnie Graham has dedicated the past three years of her career to being an Ethical Fashion Researcher for...