For years now, Baptist leaders across Ukraine have been preparing because of military threats from Russia. Pastors have even been encouraging churches to stockpile resources—food, fuel and other essentials—in case people are displaced as a result of a military assault.

That time has come. With Russia’s recent invasion into Ukraine, a humanitarian crisis is escalating as people leave their homes in search of safety. As of 28 February, more than half a million Ukrainians have fled since their homeland fell under attack, crossing the border to neighbouring countries such as Poland, Hungary, Romania and Moldova. Many are women, children and elderly people leaving loved ones behind, as men of military age join thousands of citizens—men and women—who have stayed to take up arms in defending their country.

As the situation continues, the UNHCR expects up to four million Ukrainians will be displaced, exacerbating the already urgent need for food, emergency services, medical care and refuge.

Governments, organisations and churches around the world are responding to the crisis. Countries like Poland and Romania have opened their borders. European Union members are accepting Ukrainian refugees for up to three years without asking them to apply for asylum, while Australia has committed to fast-tracking Ukrainian visa applications.

Across Ukraine, there are 25 Baptist regions. Twenty-four of these have suffered direct attacks in recent days. Missile attacks were reported perilously close to a Baptist orphanage where 60 children are housed.

While Baptist churches throughout the region are well placed and prepared to shelter displaced people, leaders expect their resources could run out quickly. Acting as ‘centres of hope’, churches are offering fleeing families food, shelter, medical care, and providing a place people can shower and wash their clothes, as well as spiritual encouragement in this frightening time.

‘No matter what news you may hear,’ said one leader from a Baptist women’s ministry in Ukraine. ‘No matter what [may come], we will stay and serve our Lord Jesus Christ.’

Baptist churches in Hungary and Poland have also set up centres for humanitarian aid. They are distributing what food and hygiene items they have and are providing basic medical care, even as reports suggest individual Baptists welcome refugees into their homes and churches.  The burden on both will continue to escalate without help from abroad.

Primary in their request to the global church is to pray for peace, and numerous Baptist agencies around the world are setting up online prayer meetings.

‘A refugee crisis is an inevitable outcome of war, and our response must be both prayer and action,’ said Melissa Lipsett, CEO. ‘Baptist World Aid Australia is responding to this crisis both within and around Ukraine, supporting Christian Partners throughout the region as they care for an influx of people seeking safety. We are also positioned with other Christian Partners at home to advocate for a stronger Australian government response to support refugees displaced from their homeland.’

Baptist World Aid’s ‘Standing with Ukraine’ appeal will provide support for food, hygiene items, medicine, generators, blankets, pillows and necessary items for displaced people as well as shelters set up for them.

‘The Lord watches over the strangers; he upholds the orphan and the widow, but the way of the wicked he brings to ruin,’—Psalm 146:9. 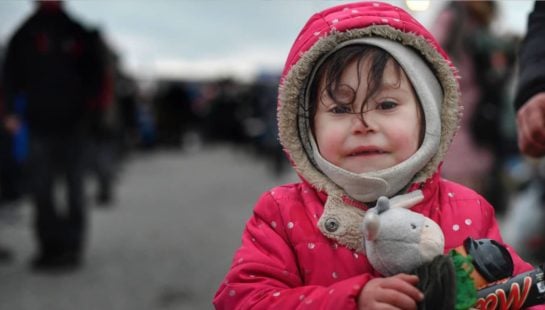