Australian Baptist Ministries has today launched Justice 2021: Toward a More Just Australia, a report into eight specific justice issues where Baptists, as is mentioned in the report, have ‘skin in the game’.

‘The report is a strong reminder that Australian Baptists are front and centre on the major issues confronting Australians and will be a critical resource for Baptists interested in those issues,’ said Nicole Hornsby, Executive Director of Baptist Care Australia, and a co-author of the report.

‘It is the first time we have done a report of this nature and we hope people will find it a useful resource and one they will refer back to and use to answer many questions they may have around the issues covered,’ Hornsby said.

‘Justice,’ we are reminded in the report’s introduction, ‘is fundamental to every society that values the wellbeing of all its members.’

And it is to society’s members that the report is targeted according to Peter Keegan, Director of Advocacy at Baptist World Aid, who believes the report will provide useful guidance for Christians seeking to understand the world around them.

‘Essentially, it is “What does faith look like when it meets the world?”,’ he said.

Each chapter has therefore been authored by the Baptist organisation intimately involved with that issue. Baptist Care Australia led on the homelessness and aged care sections; NSW/ACT Baptist Association led on domestic and family violence; Baptist Union of Victoria and A Just Cause led on Aboriginal and Torres Strait Islander justice and on the asylum seeker and refugee chapter.

‘I am pleased that we were able to write three of the report’s chapters,’ Keegan said. ‘Those topics are central to the work of Baptist World Aid and are evident in our international development programs and disaster response; child sponsorship and other fundraising initiatives, and with our well-known Ethical Fashion Report and Ethical Fashion Guide.’

Justice is fundamental to every society…

The report was initially intended to complement the annual Converge Conference, a conference that will see almost 90 Baptist leaders this week come together online to discuss the fundamental social issues affecting Australia.

‘Converge creates an opportunity for Australian Baptists to become part of the national public policy conversation,’ said Scott Higgins, founder of the conference and of Baptist organisation, A Just Cause.

The conference will begin with a full day of training, something that has become an essential component on the agenda, according to Higgins. ‘The training is two-fold: it allows the participants to grapple with the issues at hand and gain a clear understanding of where we, as Baptists sit, individually and collectively, with each issue,’ Higgins said.

‘That process then provides the motivation and confidence for each participant to engage with their local government and other influencers on those social justice issues,’ he said.

Justice 2021: Towards a More Just Australia is the first report of its kind from Australian Baptist Ministries and its potential is creating quite a buzz for those involved.

‘While the report was created as a resource for the Converge conference, we suspect, and hope, that the report will take on a life of its own over the next 12 months,’ Keegan said.

‘We’re already hoping to produce an updated report at least every year but also hope we can include other resources like a prayer guide, Bible studies on each of the topics covered, additional resources or further reading for each topic, calendars and so on. All of us who worked on the report, every organisation, is really excited about how it might develop,’ he said.

Both the Converge conference and Justice 2021: Toward a More Just Australia seek to empower all individuals—Baptist leaders and Australian Christians—to advocate on the justice issues facing Australian society. But the focus is always on those whom we collectively seek to serve.

‘It is our aim that our advocacy reflects the voices of those who are experiencing injustice,’ the report said.

Justice 2021: Towards a More Just Australia is available for download now.

Towards A More Just Australia Matthew Smeal
Matthew Smeal is a photographer and writer who specialises in humanitarian issues. Fleeing From Home: A Crisis Unfolds 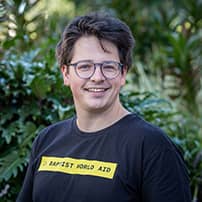