That was the day the sky broke. My optimism—formed from a bubble of white middle class privilege—shattered the minute I looked up and saw smoke. I’d seen smoke in New York skies before; fires in old buildings were as common as Broadway crowds. And I’d read the news of far-off earthquakes and wars, of America’s troubling history of injustices. I knew life wasn’t cheery or comfortable for everyone.

But this smoke, this view, was different.

And when I saw it, my blue-sky perspective began to crack for good. I saw darkness in the daylight, on street corners near where I’d worked. I saw dust snowing from crumbled towers I’d posed in front of for photos with friends. I saw terrified people, covered in that dust, hurrying shoeless up 8th Avenue.

Almost everyone I know can remember where they were twenty years ago on September 11. They recount the phone calls in the middle of the night to ‘turn on the television’. The car radios blaring out that a plane had hit one of the Twin Towers. The meal that went cold when the news shocked the world.

Few events offer such a shared global memory like 9/11 does. For me, it is also a clear marker in my life—a pre and post learning curve—when my optimism died and sank into my heart. Hard. I cried a lot. I clung to my husband and friends even more. And yet in grief’s wake, a strange new quality began to emerge: empathy.

I’m ashamed to admit that a world tragedy in my backyard made me suddenly aware of the definition of compassion: to suffer with. New York City was my home. This horror was my horror. These assaults and sorrows and losses mine. My intellectual understanding of ‘loving my neighbour’ was vastly different from the reality that New York strangers were now asking me: ‘Everyone in your life okay? You okay?’

They were the days I began to learn that genuine hope comes in the form of water bottles and presence. That sitting with a lost tourist or listening to a journalist say she couldn’t go on covering ‘this’, is not the same as deed-less platitudes about a sunny tomorrow.

I remember joining lines of people wanting to give blood for those injured, to do something in response. Anything. We waited for hours, even when we were told hospitals wouldn’t need extra blood, if there were no survivors.

Twenty years on I think of other markers: hurricanes decimating poor communities I’d visited. Mass shootings in schools a few miles from where I grew up. Wrongful arrests of African Americans who were my neighbours. My heart cracks more at the news of each, the wounds of compassion raw, the feeling of helplessness big.

Twenty years on I’ve made my home in my husband’s country, Australia, one debating whether we should take more than 3,000 refugees from Afghanistan or how much COVID aid we can afford for our Pacific neighbours. As I listen, I remember the missing people posters tacked on streetlamps around New York City just days after the attacks.

It is tempting to harden our hearts, to keep the disconcerting events of the world at bay. It’s easier to turn toward brighter skies and say these are not our problems. But empathy sees the faces. Compassion invites us to a better, though no doubt costlier, response. And in the process, each crack begins to mark us as fellow human beings.

This article first appeared on the Public Christianity website on 10 September 2021. Jo Kadlecek
Jo Kadlecek moved to Australia from Boston six years ago and lives in Sydney with her husband and their dog, Clark Kent. She is the communication manager at Baptist World Aid Australia. 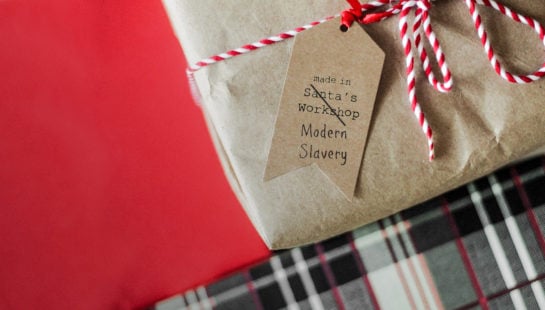 Eight tips to buying an ethical gift this Christmas

Forget the scented candles, the monogrammed socks, and plastic novelties! Give a gift that means more this... Ask yourself this question before buying on Black Friday

With Black Friday sales around the corner, ask yourself this one question first before buying.