Baptist Hospitals in PNG on brink of closure!

I am sure you agree… 2020 is not quite the year we were expecting! From bushfires to global pandemics, this year has challenged us all.

Things that you and I took for granted, like meeting together in person for a church service, have been sacrificed as we work together to stop the spread of the coronavirus. I don’t know about you, but I really miss being able to gather with my church family.

But as is so often the case, God had something to teach us in the middle of the chaos…

In early June, I caught up with Mark Lilley, Senior Pastor at Carey Baptist Church in Western Australia. I asked him about what church had been like for his congregation through lockdown. Many of his words have stayed with me, but one story really stood out.
Earlier this year, Mark’s was one of the hundreds of Baptist church congregations that took part in Stand Together, a Baptist World Aid prayer journey that called on thousands of believers to pray for vulnerable groups facing the threat of coronavirus. Like other churches, Carey Baptist Church had been holding their services online, via Zoom, when Mark began to notice the ways that God was using this new and untested service format.

It felt to him as though there was a different level of engagement among the congregation – perhaps this was because everyone was really missing community during a time of isolation.

“It seemed like people felt they had more of a right to engage and talk into that space,” explains Mark. “Whereas when you’re meeting face to face, there’s probably less inclination to open things up for conversation.”

You are probably all too familiar with Zoom by now – that grid of everyone’s faces. In some ways, it is the perfect context for a prayer journey about solidarity and standing together with other believers. Something which was made particularly evident to Mark in the first week of Carey Baptist Church’s Stand Together journey.

When it came time to pray, Mark left it open, creating space for anyone who felt prompted to lead the congregation in prayer for the vulnerable.

That’s when an eight-year-old girl began to pray.

“It felt like a holy moment, with this young eight-year-old girl leading us off in the most heartfelt prayer,” says Mark. “She’d been listening to the story of the vulnerable and had taken it into her own heart and her own mind.

“To have a child leading our church family in that way… I think it made a statement. An eight-year-old child perhaps doesn’t have a lot of capacity to change things in a significant way. But she knew what she could do and that was to pray.”

What a beautiful reminder for all of us!

Two things struck me as Mark shared his story… and I would love to share them with you, today.

Firstly, children can be powerful leaders

For Carey Baptist Church to have created a culture where an 8-year-old child already understands her responsibility as a believer to care for the vulnerable… where she knows she is a valued member of a community and feels confident to lead that community in prayer… well, I think that is a special thing!

Wouldn’t it be amazing if children everywhere could feel this way… to know they have a voice and to have the confidence to use it to advocate for themselves and for others? This must be one of my favourite things about the Baptist World Aid Sponsorship Program. It recognises the value and potential of children and, through your generous support, children are equipped to participate, advocate and become leaders in their communities! (Find out more about our Sponsorship Program, here.)

God is always on the move

At the beginning of lockdown, Mark had no idea how church online would be received. But in the hands of our creative God, challenges become opportunities. They become a chance for Him to once again demonstrate His faithfulness and power…

“I think the service has been a little bit less planned. But we’ve just kind of gone with how God led us, and that’s been really helpful in terms of sharing together and for prayer,” says Mark.

In the end, our uncertainty has actually created a new space for God to move. And part of what made Carey Baptist Church’s Stand Together prayer time so powerful was that it wasn’t just one person praying up the front – anyone and everyone was invited to lead the church in prayer.

Isn’t it amazing how God chooses to reveal Himself? Emma Pitman
Emma has worked for Baptist World Aid since 2018. She is passionate about using her voice to encourage and support others, and to make the world a more just place. On Lament and Resilience

Even with much to lament in our world, we know we are wired for resilience 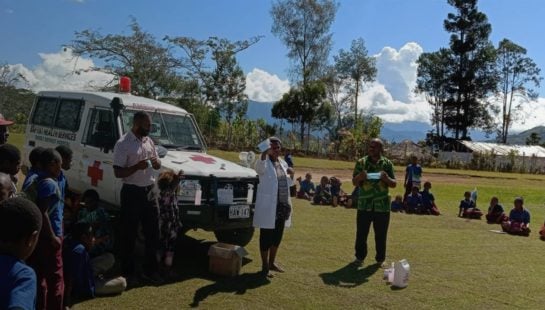